With over 1,300 exhibitors there was a lot to see, here’s a quick video update;

Following several rounds of high-stakes talks, Germany has now a framework for ditching coal. But it still has to be put into law.

A German commission last month said the country, one of Europe’s lingering bastions of coal generation, should phase out the fuel source by 2038.

“This is an historic accomplishment,” Ronald Pofalla, chairman of the 28-member government commission, said at a news conference after the negotiations concluded. “It was anything but a sure thing. But we did it.”

But the work isn’t done yet. According to Gregor Kessler of Greenpeace Germany, there’s still a lot to do.

“The first thing to bear in mind is that the commission’s report is still only a recommendation at this stage. However, it’s one that was specifically commissioned by the government, with a near-unanimous vote,” Kessler said. “It would be irritating if it is not put into a legislative framework,” he added.

That seems unlikely, though. The landmark deal, achieved only after fraught discussions over the target date of completion, looked to keep mining interests happy by injecting the equivalent of €40 billion ($46 billion) over 20 years into coal-dependent regions.

It is proposed that this financial aid should be enshrined in a special coal industry restructuring law, so beneficiaries know for sure they can count on the support in coming years.

Meanwhile, said Kessler, climate-related parts of the proposal are due to go into a climate act that the government has promised for later this year. The wide-ranging act is due to cover not only energy but also transport, agriculture, industry and housing.

It will set out how these sectors need to be restructured to meet a 2030 target of 55 percent lower carbon emissions than in 1990. The aim is to have a first draft of the law before the summer break, Kessler said, although there are fears it could be delayed until autumn.

For the energy sector, the big issue will be how to bring about the coal commission’s recommendation of removing 7.7 gigawatts of hard coal and 5 gigawatts of lignite generation capacity from the grid by 2022.

“Merkel’s government has to identify which plants will be switched off to meet these reductions and has to find a financial agreement with the utilities,” Kessler said.

Another short-term issue for the government is how to resolve problems linked to Hambach Forest, an ancient woodland habitat that is due to be cleared by landowner RWE to make way for extensions to Europe’s largest open-pit lignite mine.

The forest has long been a flashpoint for environmental protests and was singled out by the coal commission, which was set up in June 2018, as being in need of protection. With all this, it is clear that the coal commission’s recommendations will take a while to implement.

The European policy newswire Euractiv cited Federal Minister for Economic Affairs and Energy Peter Altmaier as saying it could take at least a few months to address the legal questions raised by the phaseout, although the budget for the support program was already in place.

In a press release published in association with the Friends of the Earth Germany and the nature conservation body Deutscher Naturschutzring, Greenpeace said the commission’s report was “not enough for climate protection.”

The associations both “firmly assume the end of coal will come before 2035,” it said.

The political will to achieve this may exist. Germany has already conceded it will miss its 2020 emissions target, which the Financial Times said was “a severe embarrassment for a country that once prided itself on its green leadership.”

German lignite and hard coal generation capacity has fallen from 48.9 gigawatts in 2008 to 45.4 gigawatts last year, based on figures from Clean Energy Wire. However, the two fossil fuels still accounted for more than 35 percent of all generation in 2018, the figures show.

That’s almost exactly the same proportion as renewables, with natural gas and nuclear making up most of the remainder.

Since Germany is phasing out nuclear, too, the country will effectively have to replace 47 percent of its baseload capacity with new forms of generation in the coming years. It will be interesting to see how the world’s fourth-largest economy rises to the challenge.

Toyota hydrogen fuel cell vehicles hit the road in Melbourne trial
Melbourne’s Hobson’s Bay City Council will be given three Toyota Mirai hydrogen fuel cell electric cars to test over a 12-week period – the first vehicles of their kind to be driven under real-world conditions in Australia.The Mirais will be driven by council staff in their day-to-day duties, and refuelled at a mobile hydrogen refuelling station at Toyota’s former automotive plant at Altona, not far from Hobson’s Bay. 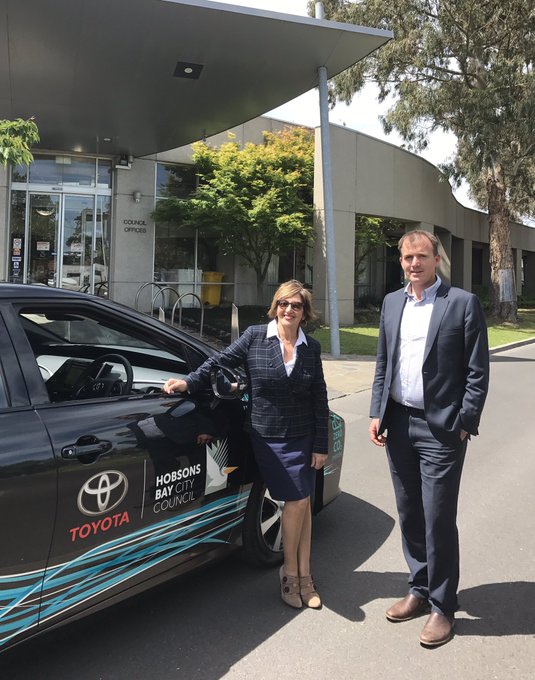 as part of Council’s operations fleet for three months. Using these vehicles is all about reducing our greenhouse gas emissions to meet our community’s environmental goals. https://tinyurl.com/ycorwpdm

The cars, which display the vehicles’ 550km range and fuel type prominently on the body, mark an important step towards normalising the presence of FCEVs on Australian roads.

The trial is the first of several to be run in Australia by Toyota over the next three years.

“It’s an exciting first step to not only build greater awareness about this new technology and the Mirai FCEV, but it’s also step towards a cleaner, greener future,” said Toyota Australia’s manager of advanced technology vehicles and site development, Matt MacLeod.

“We know that it’s only a matter of time before CO2 regulations arrive in Australia, and that’s why there is such a huge focus on zero emission vehicles like the Mirai.“This trial is a step in the right direction and that’s why we’re excited to partner with Hobson’s Bay City Council to see these Mirai used in a number of real-world applications,” he said.“It’s a great opportunity to highlight the fact that these cars drive just like any other vehicle, except they don’t make any engine noise and emit nothing but water vapour.”For everyday Australians, the Mirai is not available for sale yet in Australia – “mainly because there isn’t existing hydrogen refuelling infrastructure to support it,” says MacLeod.

But Hydrogen Mobility Australia CEO Claire Johnson says the Toyota trials will help to drive the start of a hydrogen industry here – which has the potential to add $1.7 billion to the economy.

“Hydrogen mobility is being recognised by governments around the world to meet their environmental and economic goals, Johnson said.

“In Australia, we are working with governments at all levels to accelerate the introduction of hydrogen transport with positive progress to date, however public-private partnerships will be essential for the long-term success of this important sector.”

For the Hobson’s Bay Council, the trial forms part of its 2030 Community Vision, which focuses on sustainable practices, and will assist the council in achieving its goal of zero net emissions for operations by 2020.

“This is such an exciting opportunity to partner with our friends at Toyota and experience their emerging technologies,” said Hobson’s Bay mayor Angela Altair.

“We are proud to take a leadership role in supporting low emissions vehicles and the development of new and innovative technologies that address climate change.”

Melbourne will also be the testing ground for a trial for hydrogen fuel cell forklifts at the Altona plant, the first of its kind to be conducted outside of Japan.

In addition to being completely free of CO2 emissions, the forklifts and the Toyota Mirais present an opportunity to use sustainable hydrogen generation processes using nothing but the sun, win and water – not only further reducing CO2 emissions but also saving money.

The forklifts are also easier to use, he says.

“With conventional forklift special care is needed when charging and maintaining the battery, whereas a FC forklift is considered simpler when it comes to refuelling and scheduled maintenance.”

Toyota has its eyes set on becoming the leader in FCEV technology in Australia, having been instrumental in setting up the industry association Hydrogen Mobility Australia with Hyundai in 2017

One of the unique parts of the CONSORT project is our focus on the customers’ and in particular, their experience of the technology. This is not just their financial or economic outcomes, but includes how they feel about contributing to the local network for the benefit of their neighbours, and how they respond to things like receiving notifications of upcoming peak load events. Our motivation is to understand what makes customers come to trust that the technology we’ve developed is actually acting in their best interest, and what customers perceive as fair compensation for the network company occasionally making use of energy stored in their batteries. The CEC Business Community Engagement Award reflects the value that the industry puts on these considerations.

The AEEA awards recognise outstanding achievement in engineering and the invaluable contribution engineering makes to the economy, community and the environment. The project was previously awarded EESA’s Energy Project of the year and the Clean Energy Council’s Business Community Engagement Award in 2018.

The award coincides with the CONSORT project passing another important milestone, in demonstrating how smart coordination of home battery systems can help to support electricity networks, while rewarding battery owners for this support.

The trial, based on Bruny Island, Tasmania, was able to prevent project partner TasNetworks from having to start their backup diesel generator during a major network peak.

20/05/2015: Product recall for HGN4-32DC Isolating Switches
Between 7th October 2011 and 1st March 2014 I Want Energy supplied and installed DC isolating switches with the part number HGN4-32DC. These switched were purchased from an Australian company based in New South Wales. Some of these switches have proven to be faulty and there is the potential risk of fire from faulty contacts within the internal mechanism of this switch.

We have compiled a comprehensive list of all of our installations during the period 7th October 2011 to 1st March 2014. This list of installations has been provided to the Department of Justice Tasmania and they have instructed Tech Safe Pty Ltd to conduct inspections on some of the installations.

We have now contacted the ACCC to enact a product recall. The process has now begun of visiting each installation to replace these switches. I Want Energy will be conducting this replacement program by postcode and then reporting to the Department of Justice when each postcode has been completed.

We will be notifying each customer in their respective postcode of an approximate time frame for this work. You do not have to be home when we visit but we will need access to your roof and your inverter.

There is no cost to the customer for this work.

Please feel free to contact us for any further information, office@iwantenergy.com.au